ECW (European Cyber Week) is a Jeopardy student CTF challenge. It is organized by Thales, Airbus and the Bretagne region. I had a great time solving these challenges, especially reverse and pwn ones. Hurry to hand over this !

Once analyzed, this binary will probably give you a flag!

This is a Windows x86 binary, as file tells us.

Let’s run the binary with some sample inputs to have a first look at it !

It looks very classic, we must provide the flag as argv and the binary will check if it is alright.

The binary is stripped :( 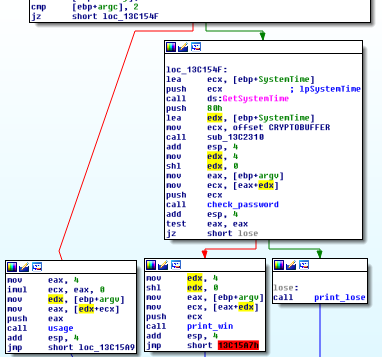 If the new result is equal to the reverse length computed before, it goes to the following checks, which are simple checks on the first 4 chars and last 4 chars.

If this statement catches an exception, an handler function is called and it then resumes to the handler_func_return label (in red).

The exception handler function code can be easily found because this function is passed as reference to the try/catch statement at the beginning of the check_password function.
After reviewing it’s code, it appears that the exception handler calls VirtualProtect function from the Windows API to remap the text segment of the executable as RXW, modify it and remap it as RX after. It basically modifies some of the checks on the password in check_password.

After digging deeper in the executable, I found that the presence of a debugger is checked 2 times :

So, the final strategy is to put a breakpoint after the calls to IsDebuggerPresent() and IsDebuggerPresent_custom(), set their return value to 0 (False) and set another breakpoint at the beginning of the password checking code to extract the real conditions.
Let’s run the binary with some sample inputs to have a first look at it !

I made a quick and dirty Python script which recover the password from the conditions we can extract from the patched check_password function.

Finally, let’s use this password to get the flag !!